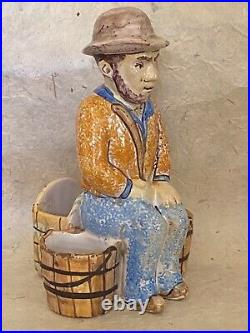 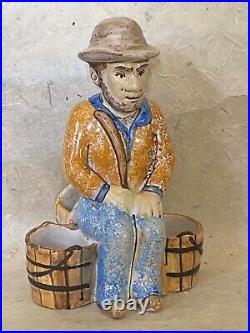 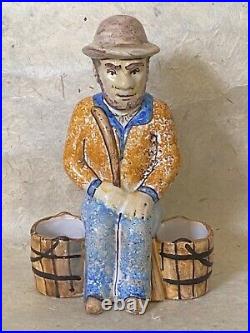 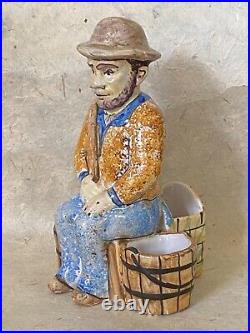 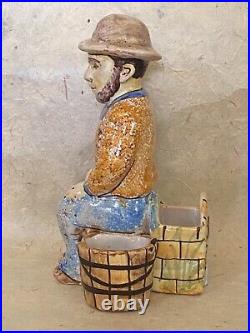 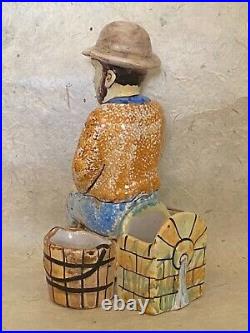 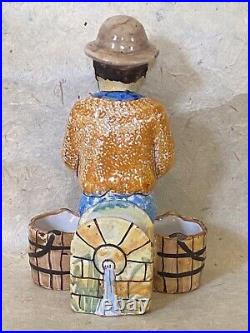 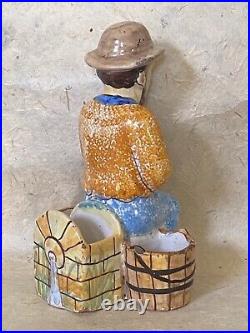 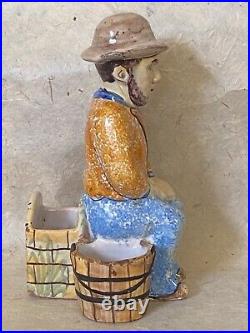 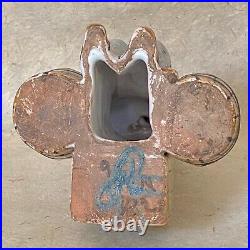 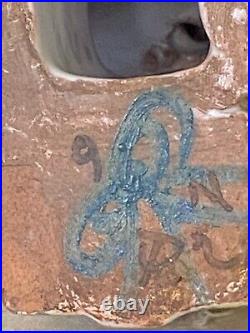 TROUSSEAU ET CIE Man w/ Baskets Triple Salt NEVERS French Faience Antique c1900. This rare and whimsical Figural Triple Salt, or Saleron. Is a French Faience Antique. WITH BASKETS TRIPLE SALT. Includes a Seated Bearded Man with an expressive face with an intent stare. Is wearing a period style patterned ensemble including a dressy jacket with collar, long pants, shoes, a Bowler hat; holding a club in his right hand; and is seated between two large wooden buckets with handles and in front of a brick cistern with water flowing out the back. Has a recessed bottom under the man and the balance of the base is an unglazed. Has well done modeling, decorating, and glaze with typical colors of NEVERS pottery: creamy white background decorated with orange, blue, beige, brown, manganese and black. Has a makers mark on the underside: a large a double ribbon bow in blue glaze, with numbers and symbols in black- the mark of TROUSSEAU ET CIE (1885 – 1894), marks of old and original French Art Pottery. The estimated date is circa 1890. Seated Man Triple Salt. Is in very good condition- noting some minor losses, namely a chip on the underside of the hat brim over the left ear, and some fretting to the top edge of the right bucket. Otherwise, condition status includes minimal normal wear and rubbing, glaze losses, firing flaws, crazing, and fretting. Overall, this work is sound, having other no chips, cracks, or major defects, and having had no apparent repairs or restorations. Please see all photos which are a part of this description. Please note; photos have been taken in indirect sunlight; therefore, reflections and lighting spots may appear, but do not necessarily indicate defects. Dimensions: 6.7 in. Tall x 4.6 in. Wide x 4.1 in Deep. This is NEVERS style fine country French art pottery. This style includes production techniques whereby tin glazes and decorations are applied and worked in stages upon a modeled terra cotta pottery form and fired several times in a kiln. It is noted that French Faience is not inherently “perfect” – larger pieces were still hand made in this era and as such have marks like little dents in the pottery which are glazed over. This is not damage- this is part of the history of old pottery and how it was made. Please note this faience item is from Nevers faience. Not Quimper or Desvres. Though similar, there are different color palettes used and other nuances on the two potteries. Nevers faience manufacture was from central France in the area of the same name. The area was famous for superb art pottery known as faience; a pottery technique whereby tin glazes and decorations are applied over a modeled terra cotta or clay forms, and fired several times in a kiln. The city of Nevers, Nièvre, now in the Bourgogne-Franche-Comté region in central France, was a center for manufacturing faience, or tin-glazed earthenware pottery, between around 1580 and the early 19th century. Production then gradually died down to a single factory, before a revival in the 1880s. In 2017, there were still two potteries making it in the city, after a third had closed. However the quality and prestige of the wares has gradually declined, from a fashionable luxury product for the court, to a traditional regional specialty using styles derived from the past. Nevers faience was one of the centers where the istoriato style of Italian maiolica was transplanted in the 16th century, and flourished for rather longer than in Italy itself. In the 17th century Nevers was then a pioneer in imitating Asian ceramic styles in Europe, within some decades followed by all producers of fine wares. The second half of the 17th century was Nevers’ finest period, with several styles being made at the same time, including a grandiose Italianate Court style. By the time of the French Revolution Nevers wares had ceased to be fashionable and expensive, but the relatively crudely painted faience patriotiques wares commenting on political events have great interest and charm. A late 19th-century revival concentrated on high-quality revivalist wares recreating past glories. In 1838, 700 workers were reported to be employed, but by 1846 only six factories remained, and by 1850 five. By 1875 its fortunes had reached a low ebb, and it was bought by Antoine Montagnon, who had ambitious plans to relaunch it to supply the market for revivalist wares imitating 17th-century pieces, often large and complex pieces. By 1881 it was the only factory left in Nevers. The Montagnon factory (faïencerie) was successful for over a century, with 50 employees around 1900, and its wares exhibited at international exhibitions, but the factory, by then the oldest in France, finally closed in 2015. In 2020, two factories remained in production, both mainly making traditional styles. Please bookmark this work; Listing Category and List Price are subject to change. The age quoted is an estimate based on form, design, research, and Sellers collecting experience. If you see something wrong in a listing, please send me a message and let me know and I will address the situation accordingly. The item “TROUSSEAU ET CIE Man with Baskets Triple Salt NEVERS French Faience Antique c1900″ is in sale since Monday, July 19, 2021. This item is in the category “Pottery & Glass\Pottery & China\Art Pottery\European Pottery\French”. The seller is “fleurman” and is located in West Palm Beach, Florida. This item can be shipped worldwide.