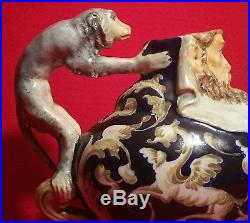 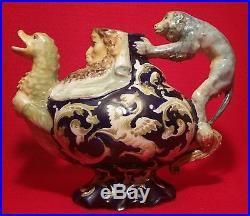 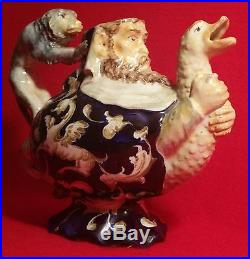 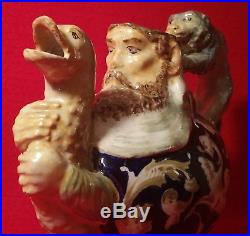 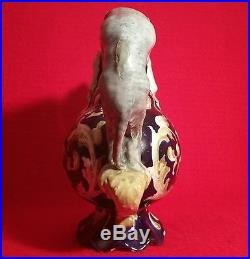 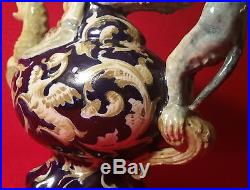 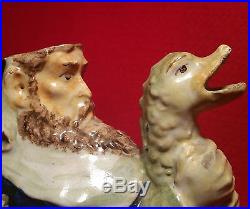 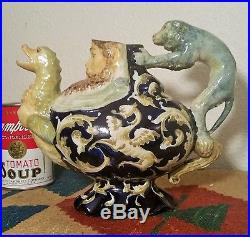 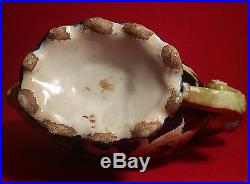 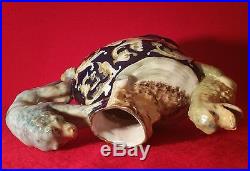 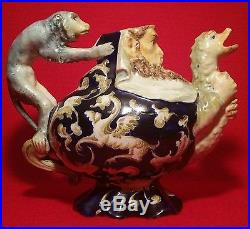 An extremely rare and early depiction of ostrich riding. Figural Hausmaler grotesque teapot featuring a 5th-15th century (the middle ages) nobleman and his monkey riding an ostrich! Is this a Du Paquier? Leading porcelain experts claim this is Neptune and the spout is actually a dolphin or fish, but we dispute that. Each pot was handmade and the neck on this one has raised ostrich-bumpy-skin not seen on other pots. Paquier’s’dolphin’ pots have smooth necks with painted-on fish scales. Also, it looks like an ostrich and has an ostrich-egg-sized body. We believe the decorations best match pieces out of Gien. Missing its lid and has a very old repair to the glaze on the monkey’s back (see pics) otherwise in wonderful condition with only minor glaze flaking here & there and age crazing on the white-underside. A five pound sterling silver ” Bug Basket ” from Buckingham Palace, the most-prized possession of the last reigning monarch of The Kingdom of Hawai’i, an artifact from The White House and Porcellian Club (the birthplace of Facebook), the first man to the moon’s 1st appearance in Space, an authentic Witch coven’s serving charger and an 1885 New York City “Sitting Bull” Cigar Store Indian are but a few of our most interesting pieces. Presidents, a Prime Minister and other Heads of State, Middle Eastern & European monarchs, museums, Hollywood celebrities, billionaire software & oil tycoons and the World’s leading interior decorators & designers. The best way to view our store is by’highest prices first’. The item “GROTESQUE ostrich teapot antique french faience gien majolica monkey vtg pottery” is in sale since Wednesday, November 21, 2018. This item is in the category “Pottery & Glass\Pottery & China\Art Pottery\European Pottery\French”. The seller is “wetinwashington” and is located in Tracyton, Washington. This item can be shipped worldwide.